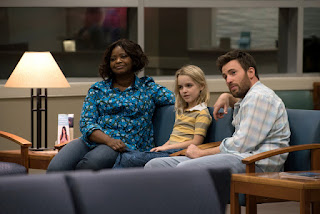 Frank Adler (Chris Evans) struggles to make a living as a boat repairman in Florida while raising his young niece Mary (Mckenna Grace), who was left in his care after his sister committed suicide. Mary is a strong-willed child prodigy with uncanny mathematical skills that she inherited from her mother. When her first-grade teacher Bonnie (Jenny Slate) discovers her abilities, it isn't long before a normal school life disintegrates. Frank's estranged mother Evelyn (Lindsay Duncan) learns about
her gifted granddaughter and has her own motives for becoming her guardian. With help from his friend/landlady Roberta (Octavia Spencer), Frank goes to court to keep his niece. Complicating matters is his growing attachment to Bonnie.

Strong performances overcome this cliche-ridden drama for a truly emotional and rewarding experience. Director Marc Webb ("The Amazing Spider-Man") and screenwriter Tom Flynn skillfully blend humor into a familiar family angst plot to create a movie that feels fresh. But what really grabs attention is every scene that includes the magnetic and charming Mckenna Grace. She convincingly runs the gamut of emotions and will make you laugh and cry. This talented 10-year-old actress already has a lengthy list of credits that includes television's "Designated Survivor", where she plays the President's daughter. It may be early in the year, but Mckenna deserves an award for this role. Distancing himself from Captain America, Chris Evans is magnificent as the uncle who will do anything to keep his niece. He impressively interacts with the young actress and a one-eyed pet cat - not an easy task. Chief among the supporting players are Jenny Slate as a dedicated teacher who has feelings for Frank and Lindsay Duncan as the controlling grandmother. Octavia Spencer gets a little screen time as the gruff, but loving landlady. This shamelessly manipulative film will steal your heart in a good way. "Gifted" is an accomplished tearjerker. (4 CAMS)