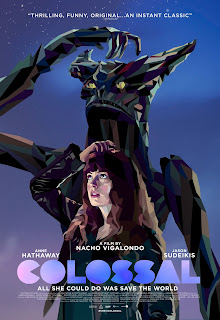 Thrown out by her boyfriend (Dan Stevens) for being an alcoholic and out of work, Gloria (Anne Hathaway) heads back to her family's small-town home for a change in life. She becomes a waitress at her childhood friend Oscar's (Jason Sudeikis) bar and spends the after-hours drinking with Oscar  and his buddies Garth (Tim Blake Nelson) and Joel (Austin Stowell). One day, she awakens with a hangover to news reports that a giant creature has attacked Seoul. This monster appears each night at the same time, makes weird gestures and disappears in a cloud of lightning. Gloria soon realizes that the creature is
mirroring her moves in an empty playground sandbox as she stumbles home after carousing. She demonstrates to Oscar and his friends. Soon a giant robot also appears in South Korea - creating a problem that needs to be fixed.

While not perfect, this inventive sci-fi dramedy is something different in a cinematic world of sequels and copycats. Credit writer/director Nacho Vigalondo with putting a new and sometimes humorous spin on what amounts to a relationship drama. Gloria's mental breakdown that is deep-seated in childhood trauma is the focus of this film and Anne Hathaway's multi-layered performance makes this premise believable. The biggest surprise is Jason Sudeikis. The SNL comedian proves here that his dramatic turn in 2016's biographical film "Race" was no fluke. His friendly character's transformation to jealous rage when Gloria has a fling with bar buddy Joel is one of the movie's highlights and drives the ending creature/robot confrontation. Dan Stevens ("Beauty and the Beast") is relegated to near cameo status as the boyfriend. The Godzilla-like destruction adds a cartoon dynamic to the real-life relations that take up most of the screen time. An energetic music score by Bear McCreary adds to the excitement. The origin of Gloria's situation is somewhat muddled and there are a few unanswered questions. But this is a novel approach that should be commended. The appealing "Colossal" is a gigantic leap forward for originality. (3 CAMS)