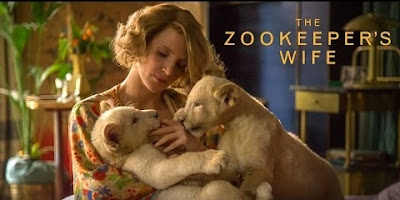 Before the start of World War II in Poland, Dr. Jan Żabiński (Johan Heldenbergh)and his wife Antonina (Jessica Chastain) have a good life as the caretakers of the Warsaw Zoo. When the Nazis invade their country, the heroic couple risk everything to save their animals and the lives of people trapped in the Warsaw Ghetto. Standing in their way is
former colleague Lutz Heck (Daniel Brühl), who has been appointed the Reich's chief zoologist. Many sacrifices will be made before the war's end.

The remarkable true story of the Żabiński family's courageous efforts in Warsaw is effectively dramatized in this inspirational film. While it lacks the power of "Schindler's List", director Niki Caro ("Whale Rider") and screenwriter Angela Workman have created a fascinating, but not gripping, cinematic version of Diane Ackerman's book. It's two hours of watching a horrific chapter in history unfold - with very little character development. Jessica Chastain, who is also one of the executive producers, does manage to add depth and an interesting accent to her role as Antonina. She displays a wide and believable range of emotions, giving the audience someone to root for. Johan Heldenbergh and Daniel Brühl heighten some of the drama as a driven husband and the feared Nazi officer who desires Antonina. The performances are all good, but no time is devoted to fleshing out the lives of the hundreds of Polish Jews who were given sanctuary at the zoo. Still, it's difficult to take your eyes off the screen. Scenes of idyllic pre-war Poland followed by massive views of destruction are mesmerizing through the lens of cinematographer Andrij Parekh. Atrocities under Hitler's rule should never be forgotten. There have been many movies to remind us. Keeping memories alive, "The Zookeeper's Wife" is uplifting and captivating. (3 CAMS)