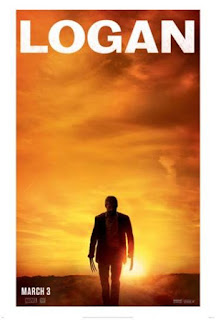 In the near future on the Mexican border, a boozing and worn-out Logan (Hugh Jackman) makes a living as a chauffeur while caring for the ailing Professor X (Patrick Stewart) with the help of albino mutant Caliban (Stephen Merchant). When a desperate woman (Elizabeth Rodriguez) convinces Logan to help a pursued young mutant (Dafne Keen), Wolverine is drawn into the battle against the evil Dr. Zander Rice (Richard E. Grant) and his ruthless head of security Donald Pierce (Boyd Holbrook). The survival of the mutant population depends on the outcome of the race to reach a safe haven.

The darkest and arguably the best of the Wolverine adventures is an emotional journey that's marked by bursts of bloody violence. It has been reported that this is Hugh Jackman's
last portrayal of Logan and, if so, this marvelous film is a fitting conclusion to the series. James Mangold, who teamed with the star on "The Wolverine" (2013), returns as director/co-writer for this project. The result is a magnificent western disguised as a futuristic chase thriller. Jackman is perfection as the tired "lone gunman", taking on one last cause. This is a nod to "Shane" - look for scenes from the 1953 classic in this movie. In her big screen debut, Dafne Keen (TV's "The Refugees") steals many scenes as the fearless young mutant Laura, who has much in common with Wolverine. Having a nasty villain is essential for a film like this to succeed. Boyd Holbrook is absolutely chilling as the hunter Pierce, someone the audience will hate. This is a far cry from his role as a hero DEA agent in the television series "Narcos". Patrick Stewart is at his best with a nuanced performance as the aging and ill Professor Charles Xavier. The cast, a compelling script, the stark cinematography of John Mathieson and a memorable score by Marco Beltrami combine for an enthralling cinematic experience. There are a few surprises along the way. Brutal action sequences, language and brief nudity make this adults only entertainment. The eXcellent "Logan" deserves a long run. (4 CAMS)