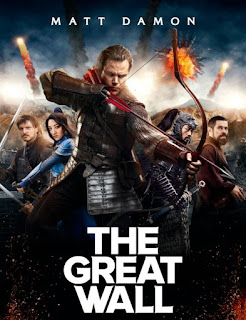 Hunted European mercenaries William Garin (Matt Damon) and Pero Tovar (Pedro Pascal), searching for black powder, are taken prisoner at the Great Wall of China by the military Nameless Order. They get caught up in the battle to defend the country from an army of supernatural creatures.

Massive sets, lavish costumes, outstanding special effects and a cast of thousands can't keep this wannabe epic fantasy from tumbling down. With a budget of $135 million, this is the most expensive film shot mostly in China and the first
English-language production for director Zhang Yimou ("House of Flying Daggers"). All of this and it still falls apart. A weak, simplistic and predictable script with silly dialogue is the main culprit. It doesn't help that Matt Damon spends the movie going through several accents and seems to be out of place in this outlandish adventure. Was he misled in how to portray his character? Is the whole production a cruel joke perpetrated by Jimmy Kimmel? Willem Dafoe doesn't fare much better as Ballard, another mercenary trapped within the Wall for years. If there's anyone worth watching in this international cast it's Jing Tian as Commander Lin Mae, the beautiful and fearless warrior who may have feelings for Garin. To the director's credit, the action comes fast and furious and doesn't allow time to think about the film's many problems. The 3D draws the audience into the action, but it's not enough to recommend this matinee flick. "The Great Wall" is not so great. (2 CAMS)