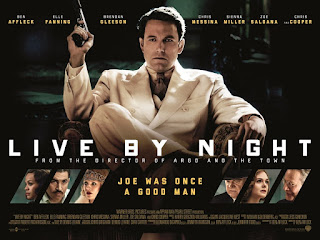 In the 1920s, Joe Coughlin (Ben Affleck), the son of Boston cop Thomas Coughlin (Brendan Gleeson), chooses a life of crime over law enforcement. His love for a gangster's mistress (Sienna Miller) and a stretch in prison take Joe from Boston to profitable illegal operations in Florida with his longtime partner Dion Bartolo (Chris Messina). Here his life becomes more dangerously complicated with gangsters, a Tampa sheriff (Chris Cooper), the sheriff's daughter (Elle Fanning) and finding a new
love in a businessman's girlfriend (Zoe Saldana).

Director Ben Affleck, who also wrote the screenplay based on Dennis Lehane's crime novel, has crafted an almost epic gangster film with mixed results. The problem is that parts are greater than the whole and it has all been done before - and most times better. There is much to enjoy in this dialogue-driven drama with spurts of action along the way. As the star, Affleck's layered performance of a complicated and conflicted man grabs the spotlight. The supporting cast is splendid, but too many characters flow in and out of the story in rapid succession. The sets, costumes and vintage automobiles make this ambitious project a fabulous looking period piece. But the first chapter in Boston and the last chapter in Tampa feel like two separate movies - which may have made this undertaking easier to absorb. While this is nowhere near the worst film of the year, the gifted director has done better work like "The Town" and "Argo". Fans of this genre and author Lehane will probably be entertained. It is at least worth a matinee price. For interested moviegoers, check out the dark-edged "Live by Night" before it's gone baby gone. (3 CAMS)