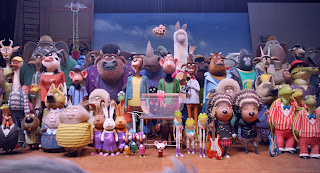 ROG'S VIEWPOINT - Koala Buster Moon (the voice of Matthew McConaughey) decides to produce the world's greatest singing competition to restore his once grand theater to its former prestige. This tuneful animated comedy is filled with songs to cover up
an all-too-familiar plot. Animal antics should please the younger crowd, but only the music will soothe the adult soul. Some major stars lend their voices to the animal talent. The stay-at-home pig with 25 piglets Rosita (Reese Witherspoon), punk-rock porcupine Ash (Scarlett Johansson), crooner mouse Mike (Seth MacFarlane), shy elephant Meena (Tori Kelly) and gorilla Johnny (Taron Egerton) are among the competition's talent. The songs range from Irving Berlin through Stevie Wonder and the Beatles. So there's something for almost everyone. As harmless family fun, the melodic "Sing" stays mostly on-key. ***