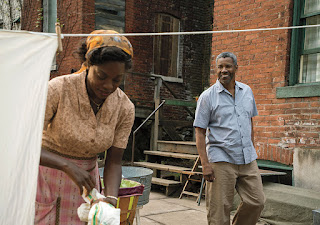 ROG'S VIEWPOINT - Troy Maxson (Denzel Washington), a failed baseball player turned garbage man, struggles to raise his family in 1950s Pittsburgh. His wife Rose (Viola Davis) stays by his side through good and bad. As both director and star, Denzel Washington brilliantly translates August Wilson's Pulitzer-Prize-winning play to the big screen. No stranger to this production, he and Viola Davis won
Tony Awards in the 2010 Broadway revival. Most of this film revolves around master storyteller Troy spinning philosophical yarns in his backyard to friends and family as he slowly tackles building a fence around his property. While this might look like a confined stage play, it's so well-written and acted that a compelling cinematic experience awaits moviegoers. There's not one sour note in the performances. Mykelti Williamson is outstanding as Troy's brother Gabriel, who is brain damaged from an injury in World War II. Also impressive are Stephen McKinley Henderson as Jim Bono, Troy's best friend and co-worker, and Jovan Adepo as son Cory Maxson. Viola Davis deserves to be the leading Best Supporting Actress contender, but Denzel shouldn't be counted out of Best Actor or Director. The emotionally engaging "Fences" will leave you feeling anything but fenced-in. 4 cams